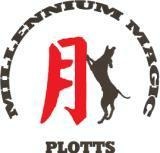 We have been lagging behind on updating some recent notable wins by MLM Magic bred Plotts.  However, he is a quick little run down.  Johnny Mills Dixie K has picked up her 4th UKC NtCh win and will be Grand Nite Champion any day.  Also, our buddy Stephen Newby has been on a recent tear with his Nitro dog.  They are currently #1 in the PKC Plott Breed Race after knocking Evan Workman & Nite Ryder off the perch.  Nitro has also earned his PKC Champion degree, as well as, picked up some other GrNtCh wins and is among the top performance point earning Plotts in 2014.  Congrats guys! Keep on Plotterizing the competition Team Brindle Thunder style!

We have went to Dave Trumbo's 4-Way Grand Smokey, a grandson of NPHA HOF GrNtCh Garrison's Ranger and a current top UKC reproducer (two similarities with Gravedigger), to cross into our stock using our Jazmyne female.  Smokey is an outcross male but with similar top lineage and we believe he will be a fantastic addition to our line.  It's an exciting time for us and we hope y'all will follow along on our journey of breeding and promoting the best breed in the world, the Plott dog.

ZUESS IS CURRENTLY HOME IN MICHIGAN FOR YOUR BREEDING NEEDS

We have very high hopes for Zuess in the breeding pen as we have just opened him up to the public and have started using him ourselves as well.  Zuess is a nice, solid dog with a ton of independence, head full of sense and a whole lot of ability.

He has a nice bawl track mouth and a loud double or triple bawl locate that he rolls over into a loud, steady chop on tree. He is also an honest strike dog who drifts a track and doesn't give mouth every step.  He opens here and there and is always moving until he gets treed.

In my opinion, Zuess should be an asset to the Plott breed and is worthy to be our replacement stud for Gravedigger.

(the proverb "History repeats itself", first recorded ((in English)) in 1561)

Millennium Magic Plotts kennel was founded by Jeremiah J. Johnson and my father, Baptist Moderator John Johnson, in the year of our lord 2000. Hence the name Millennium in the kennel name, although we got our start with the breed earlier. The magic comes from a spiritual side of hunting for me. It was our belief that the plott breed needed some magic in this new millennium to get the public and hunters aware of the awesome plott breed and what it has been and what it still represents in todays world of hounds and hunting. Millennium Plotts are the new age and will "Pioneer" into the future with a few good guys and gals at the helm and helping push us forward. Thank you all!

Promotion of our plott breed has been very underrated, understated, denigrated and not been undertaken as it should! It is not so much that our breed of choice doesn't have the dog power but the individuals working together to establish and promote on a national level that has been dominated by the walker, english, and bluetick coonhounds. As far as big game hunting the plott breed is no doubt the major force and is the top standard for all to follow.

But at our kennels coonhunting is our number one priortity. Although we have produced some good big game dogs. We are striving to put the Magic back in the competition circles. Such as the accomplishments of UKC World Champion GrNtCh Kansas Sizzlin' Heat and PKC World Champion Buckeye Bud. These two dogs in themselves have vaulted the plott breed into the limelight in the coonhunting world. Both dogs can trace their heritage back to the phenomenal cross of GrNtCh Kansas Joe Boy and GrNtCh Shortridge's Queen.

At our kennels all our dogs revolve around this blood. More specifically Hall of Fame and current Historical #2 Reproducer GrNt Ch Garrison's Ranger and our NtCh Mister Candyman, who was a son of Ranger. Our Candyman breeding has been very successful, but was cut short due to his untimely death when he was only three years old. Luckily, we were able to have GrNtCh Millennium Magic Gravedigger to take his daddy's place. We seemed to be blessed and cursed at the same time back then. But we carried on and moved forward!The recently deceased Mr. Harold Tichenor is to whom I am very thankful to. Mr. Tichenor was a very talented breeder. He gave us our start in the Plott Breed and what a wonderful start it was! Through his selection, thought, and wisdom did he make a cross that we would reap so many rewards from. The ability and genetics were already set. All we had to do was put the time in because natural-born, balanced dogs are easily started and make themselves really. Through his dedication to our breed I someday hope to carry on what he had begun!  We also have to be very grateful to Mr. Jim Cannon and Mr. Charlie Shortridge; and of course Mr. Jim Garrison for Ranger, and to Mr. John Walkup for the Bud semen, and everyone else going back from there who bred and promoted these dogs! I have the utmost respect for the "Plott Promoter" and I now have been dubbed the "Plott Advocate".

Put these pups and dogs into quality hunters hands

We will put Millennium Magic Plotts into coonhunters' kennels; into the winner's circle; and onto the pages of the cooner magazines; and onto the Map!

We will breed the best Plotts possible by being responsible and culling hard; and along the way make some great new hunting friends while enjoying our plott hounds to the best of our abilities.

We will also treat people fairly, with respect, and help good honest people who share our passion and integrity.

We will do this by putting natural dogs that are able to compete into hands of serious hunters and pleasure hunters alike! So one day to have another World Champion Plott and it will have come from our Millennium Magic Plotts Kennel. Hopefully it can be one of our new plott friends who share in this vision and passion with us. This will be a team effort all the way so get on board with us now!  We want to have a network of associates: breeders, trainers, hunters, and most importantly competitors! We know that the sum of the whole is greater than the one; and success only comes to those who work hard and dedicate themselves by planning their work and working their plan!

At this point in time, Millennium Magic Plotts has begun to grow and part of our vision has begun to come to fruition.  We have met a few good plott people that have helped out tremendously and have had support from many others, including some friends that I consider icons of the breed.  We take this as to be that we are doing something right!  It has not been easy, nor has it been a smooth ride all the way, but it has been a fun, crazy ride; and our journey is not yet complete.

New additions to our Brindle Thunder! network are Curt Ahring of Missouri hunting/training young male dogs out of Heyzuess & Brian Cochran of Illinios partner on young female dog out of Digger.

There also have been others who have helped us out over the years such as the Tichenors (the late Harold & Dan) in California, Curt Ahring in Missouri, Carl Reed in Oklahoma, Evan Workman in West Virginia, John Walkup in Ohio, Mike Walters in Ohio, Roger Steffens in Michigan, Mike Bertrand in North Carolina, Lowell Lynn in Indiana, James & Penny Johnson in Michigan, the Franklins (Bobby, Hoop & Tater) in Tennessee, Steve White in Wisconsin, Bill Herrell & Brad Bowers in Indiana, Jim Cannon & Gil Raney in Kansas, Josh Dixon and, his Grandpa, Ralph Stevens in North Carolina, Charlie Shortridge in Tennessee, Eugene & Ann Walker in West Virginia, the late Jeff Teague, & Tony Galafaro in Michigan, Vic Blanton, Chase Royer & Johnny Johnson in Michigan, Welby & Marilyn Adkins in Illinois, Dustin Davis in Tennessee, Brian Nuener, Denny Buchanan & Larry Depoister,  in Illinois, and Tim Hickman & Darrell Hunt in Iowa.  We thank them all very much for being supportive and helpful as they have been!  So you see we affiliate ourselves with good, honest, hard-hunting plott folks and are reaping the benefits of having built up a network over quite a period of time through our dogs and our kennels.

I can say without a doubt that my buddy ol' Digger has done his part in helping us out and making it possible for all of this to happen to us.  He may not be the greatest dog in the world but he's been good to us and very fun to hunt and have around.  He also has given us all something in common, while helping the Plott breed.  He's allow us to network and meet many new folks with some that we now call friends, as well as, convert and/or attract new hunters to the breed.  But most importantly, Gravedigger has given us alot of enjoyment and earned some respect for the Plott breed, as well as, helping us fulfill our Mission Statement! 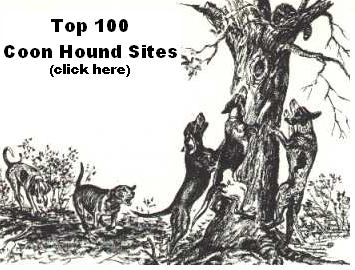